Have You Noticed? Dads and Moms Interact Differently with Their Babies! 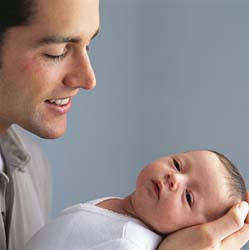 Terry is an energetic, seventeen-year-old dad. He is the quarterback and a senior at the local high school and comes to the office today with his girlfriend, Diane, and Eric, their three-week-old son.

Terry remembers what he learned on The HUG DVD. He holds his son like a football then places him enthusiastically on the exam table for his check-up. Diane laughs as Terry starts to poke at his son. First he pokes at his feet, then his knees, then his stomach, then his nose. Eric starts to breathe a bit faster and his feet start to look jerky. His eyes spring wide open, his eye brows rise, and his shoulders go up toward his ears. "I'm ready for you, Dad!" his body seems to say.

Dad steps back from the exam table as Mom reaches over to undress Eric for his exam. As she moves toward the baby, Eric's eyes start to look drowsy and his body relaxes. His movement slows down and his breathing quiets and becomes regular.

Though certainly their are differences in individual parents and babies, Eric demonstrates what research now shows, that dads and moms approach babies differently. Even fathers with childcare experience often approach a baby with big, enthusiastic movements. Their very presence seems to stimulate the newborn, as if to get baby ready for the big world out there.

The more stereotypical mother's approach is quieter, one that seems to calm the baby rather than stimulate him even more.

Babies benefit from both approaches as they grow and learn, suggests psychologist Kyle Pruett. They may learn to regulate their internal stimulation from one parent, and learn to deal with external excitement from another. (Fatherneed: Why Father Care Is as Essential as Mother Care for Your Child.) Most mothers and fathers experience some conflict as they struggle to love their baby in the best way they can. It's the lucky baby whose parents approach this struggle with passion and humor as they each become the parents they were meant to be.
(Read more sotries about new babies and their parents!)
Email ThisBlogThis!Share to TwitterShare to FacebookShare to Pinterest
Newer Post Older Post Home

Jan Tedder, a published author and international educator, has provided primary care and lactation support for decades. Her award-winning program, HUG Your Baby, is the recipient of the World Wide Web Health Award and has been well received in 20 countries around the world.